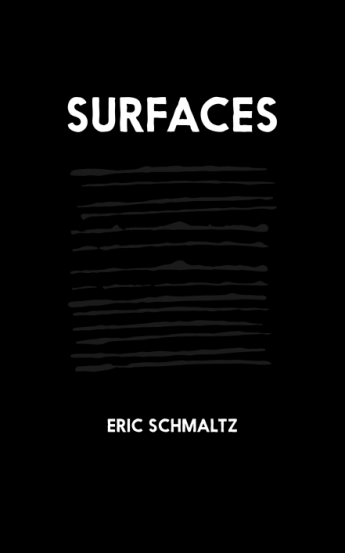 With an Afterword by Joseph Mosconi.

Pushing writing to its limits, Surfaces is Eric Schmaltz’s compelling debut collection that’s situated at the intersection of language, bodies, and digital culture. Opening toward the embodied and the intersubjective, Surfaces is at turns playful and unsettling as it explores the processes, interactions, and erasures that occur on and below the surface of writing with machinery.

Composed with a minimalist aesthetic and conceptual elements, the book combines found elements, graphic design, imprint, translation, and experimental typography to engage questions about writing and feeling in the 21st century: Where does the body go when we write to one another thru digital channels? How and what do we feel when information is realized through taps, clicks, and pressures? What happens to meaning within a digital economy when information is considered to be bodiless? Concerned with these questions, Surfaces begins to probe for their depths.

Advanced praise for Surfaces:
“Surfaces is, as the book itself confesses, a catalogue of stimulations. It welcomes the saccade of the eyes, the gambits of a distracted neck, the swim of attention in the purr and drone of the ambient. In Surfaces, Schmaltz collects works of various humours— at turns witty, stern, deeply unsettling, and playful. I appreciate what he offers as an intervention into the documents that surround the history of writing with machines, writing as machines. In taking on the pleasures of écriture, the making of the mark— embodied and digitized­— the book evokes and then transcends the often gendered binary between the mechanical imprint and the embodied impression. […] In Surfaces, there is great pleasure in navigating an alphabetic labyrinth in a time of totalizing records of space— one derives from the dérive emotive pleasures of stark abstraction and indulgent design, the tenor of a dark line or the opulent aria of a gray-scale curve.” — Divya Victor, author of Kith and Things To Do With Your Mouth

“With Surfaces, Eric Schmaltz directs our gaze to points of contact and friction, whether crafting mandalas and coptic weavings from letters’ negative space, drafting a dance between letterforms as they engage in “touch at the limits of a long passage,” or printing reliefs from a keyboard’s disassembled parts. In doing so, he draws attention to our expectation that language resolve into meaning—that letters present themselves in a contract of legibility entitling us not only to their forms, but also to some deeper content. In materializing language’s embodied “surfaces,” Schmaltz returns words’ secrecy, reminding us that those inner meanings we seek are ultimately not inherent in them but in our own projected desires and intentions—a dangerous dynamic. The beauty of these forms arises in part from their refusal to come into focus. A surface, here, becomes not only a point of contact but of resistance.”
— Amaranth Borsuk, author of Handiwork and Between Page and Screen

“Surfaces reminds us that the page is a 3D object, each page the enactment of Duchamp’s infrathin. The language skims and streaks across the thinnest of sheens, a glistening moment, an uncanny reminder of what language could be, if only we let it.”
— Derek Beaulieu, author of Kern and Fractal Economies

“The author Schmaltz … you know … and vice versa!… it is almost … no, wait scratch that – it IS …. this book just, well … quite possibly the most … ant-garde silhouettes & shapes … fascinating world of … a new wave of ….  well-structured, and can be looked … at visualizing things, this book is very, very … a “re-purposed look” … geared for the … helpful for everyone … lengths, embellishments, cuts, seams … tricks … shows versatility in … is well-presented and …  always inspires me to … to … to … get cut-up, lost or removed … with lots of handy … shows you how to alter each … delicious galore …  patterns and pattern-sequences on … repeats a patter in the words as well … what are the elements … smiled through the whole  … where flat meets flat … for cloisonné and these are … in the metric system … soooo compleeeteee”
— Donato Mancini, author of Same Diff and Buffet World

“Schmaltz’ work is part of something larger and grander, it has also become one of its ongoing highlights, something SURFACES can’t help but broadcast.”